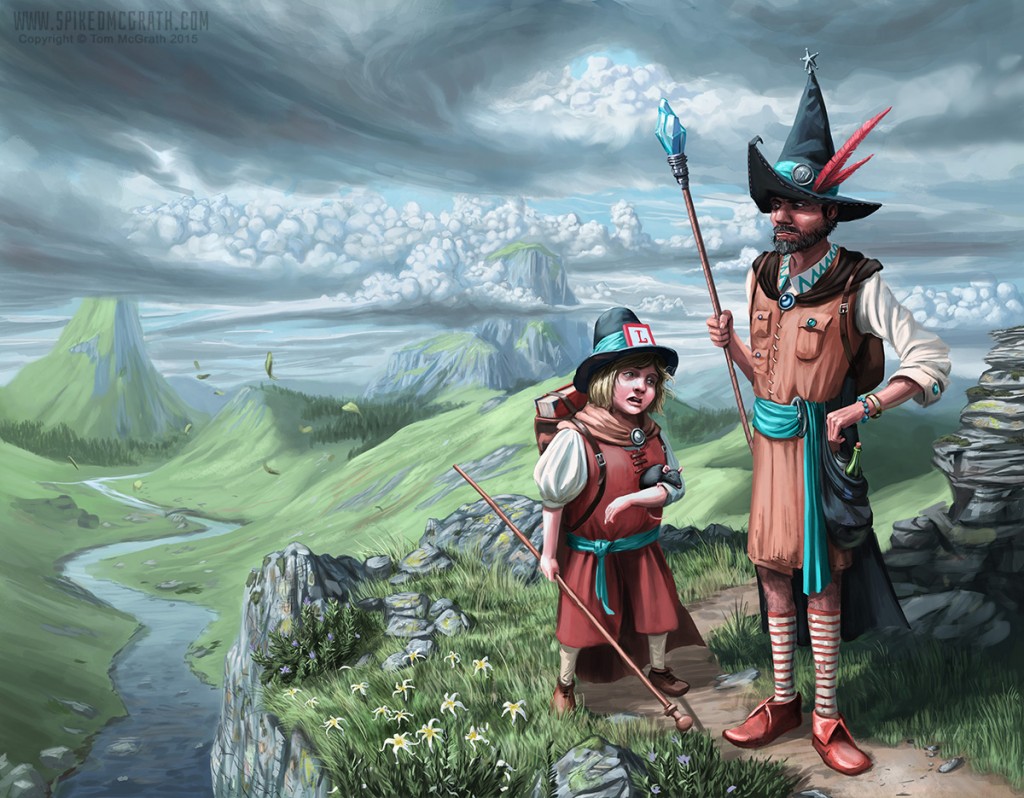 Are we nearly there yet?

“And then” said Faisal “You can have a big pointy, spectacular hat like mine! And everyone will look at it and go ‘Ooooo, that’s a big hat, she must be a proper wizard.’” He stopped and looked behind him. Jennifer was several metres away, bent double as she she huffed and wheezed her way up the path. Faisal tutted to himself and turned to survey the view.

Jennifer eventually appeared, dragging her staff through the dirt and breathing heavily.
“Are we nearly there yet?” Faisal’s brow furrowed in irritation, he pretended not to have heard her. Jennifer took this to mean they still had some way to go. As far as she could see in every direction were grey hills and green valleys topped with low heavy looking clouds that threatened rain at any moment. She decided to chance her luck.

“We’ve been walking for three hours now Faisal, can we not stop for a bit?”
“No.” said Faisal, “No, actually, we’ve been walking for..” He pulled out the battered pocket watch- “two hours, and forty …six minutes!” He tapped loudly on face of the watch with his bony fingers and then waved it in front of Jennifer’s sullen face. “See? Now come on. I want to get there before tea time.”

He turned and started to walk off, muttering something about inadequate gravy and greedy blacksmiths. A minute later he turned round and realised that Jennifer wasn’t coming- she was lying flat on her back, arms stretched on either side with her hat and her staff resting on the ground beside her. “Oi!” shouted Faisal. “Get up you bone-idle trollop! We’ll be late, we’ve appointments to keep!”

Jennifer just lay there. The wind whistled through the grass. “Right then” muttered Faisal. He marched back towards Jennifer’s prostrate form and jabbed her in the side with his staff. “Get up! Now.” She ignored him. Cauliflower sat happily grooming himself on her stomach as it rose and fell with her breathing. “We’ll be late!” hissed Faisal. “There are people who depend on us, and here we are loitering about so you can have a… a.. a nap!” Jennifer groaned.
“It’s just a cow Faisal. Can’t we stop for five minutes?”

“Just a cow? Why, young lady, that cow is one of only five cows in the entire region! If it dies, that’s twenty percent less cheese and milk- and that means less milk and cheese for us too you know! You’re not in the city any more. People round here have to make do with what they have. And what if that so-called ‘wise woman’ gets there first? She’s already killed three goats and a chicken through her inane quackery. Last month she tried to cure a headache and I had to amputate the poor man’s leg. Bloody menace she is!”
Jennifer interjected:
“Why don’t you have a smoke?”

Faisal paused mid-rant and turned to look again at the landscape, seemingly weighing up the options. After a moment he sighed loudly, sat down next to her and started fishing through his bag for his pipe.
“Alright” he said. “Five minutes.