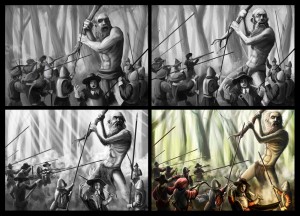 I’ve updated my gallery to include my newly completed cover illustration for the players guide of the yet-to-be-released rpg “Ellandria” I’d been working on it for a long time now, and it feels very good to finally have it completed.

I’ve posted some work in progress shots of the illustration on the left. The first wip is the top left and the newest is the bottom right. As you can see I painted most of the image in black and white first then added colour later. It’s an approach I don’t like very much I’ve decided since it complicates things later rather than simplifies them.

It shows the moment a group of ambushed soldiers fighting a “Feran” (a giant feral humanoid) start to grasp the upper hand. You can see the final picture by following this link

Also, if you look very closely you may be able to see a small cats face hidden in the picture, courtesy of my Auntie.