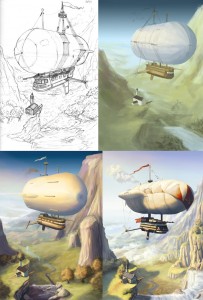 I’ve just finished my latest piece of personal work; The long Voyage, and its up in the gallery for all to see: here

On the left here you can see the process behind the image. I really wanted to do one with another with an airship in, preferably a more peaceful scenario than my airship battle picture.

The final artwork is a fair bit different to the initial sketch as my paintings so often are. I tend to paint things on different layers so I can move them about a bit and easily modify stuff. This of course means that because I can; I do. I started by blocking in the rough image in blues and greens to create a cold high atmosphere feel before deciding later I preferred the look of a warmer colour scheme even if it makes less sense, do what looks better I reckon, its fantasy art after all.

You may be able to tell I decided to scrap the airship halfway through and come up with a better design. I also wanted to ensure I got the perspective right, since I’ve got such extreme distances in the image. To do this I created a very basic airship design in Google sketchup (which I thoroughly recommend as a tool for artists) and then positioned it in the angle I wanted for the airship in my painting, before screen-shooting it and painting over it in photoshop.

Once I was sure I had the perspective and proportions of the ship right, I was free to paint all the details onto it and and work with the rest of the image. You can see the changes I made to the background in the final two images.